A new crematorium that could be built within green belt land in South Staffordshire will cater for more Hindu and Sikh funerals, a public inquiry heard. 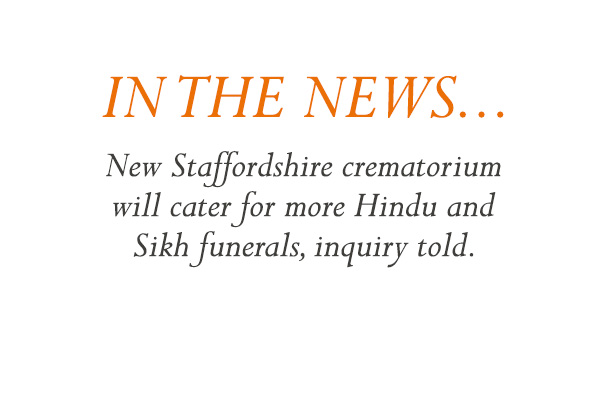 23 May 2016 by Crematorium Editor Westerleigh News

Proposals for a new crematorium in Essington are currently subject an ongoing inquiry after the developers appealed the initial rejection from the council.

The inquiry heard how the plans will see a new chapel erected on the site which would accommodate 112 seated mourners and a similar number of standing attendees.

There will also be a special room designated for those who wish to see their loved ones cremated, with capacity for an increased number of family members that can currently watch the procedure at Bushbury and Streetly crematoriums.

Speaking at the inquiry, Richard Evans, managing director for developers Westerleigh Group said: “We are seeing a generational preference for more cremations.

“Those of the Hindu and Sikh faiths also have no choice by which their loved ones are put to rest."

“According to our research, there are 27,000 Hindus and Sikhs in the catchment area of the new crematorium site, this is seven per cent of the population when the national average is two per cent. Can Bushbury and Streetly crematoriums cater for this larger population, which is set to increase, and provide services that are relevant to those faith groups?"

“Part of our application to the council was that we could cater for a greater number of those of different faiths."

“On the continent, bodies are placed and burnt on a pyre and in the UK this custom is translated into family members going to see a formal cremation."

“Currently at Bushbury and Streetly, in order to see the coffin being cremated, a restricted number of mourners are led through a series of staff doors to the site of the cremation. They cannot have a large number of people in room as temperatures reach hundreds of degrees and that is a major problem in terms of safety."

“Our proposals will see an intimate, dedicated viewing room for members of the family to witness the cremation.”

The council dispute the demographics provided by Westerleigh about the number of Hindus and Sikhs in the catchment area.

They also dispute the need for a new crematorium when reports provided by the developer show that residents in Cannock, Bridgetown and Norton Canes are only a maximum of 38 minutes and five seconds away from a crematorium in Bushbury, Wolverhampton, Streetly or Stafford.

Ian Ponter, representing the council said: “There is no evidence nor anything in planning policy that states that anything above a 30 minute travel time is unreasonable."

“The majority of those living in the referenced areas are only 30 minutes away from existing crematoriums.”