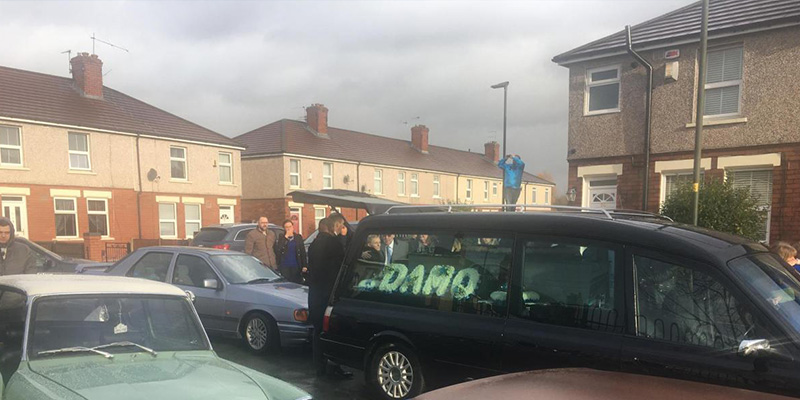 FRIENDS and family revved their engines to celebrate the life of a popular Bolton welder.
Damian ‘Damo’ Hennefer, aged 35, died on December 22, five days after being taken ill at a family party. Yesterday, his loved ones gathered to say a final goodbye.
Mr Hennefer’s procession began at his parents home in Chorley Old Road, Bolton where friends of the welder followed him to his home in Broom Avenue, Leigh.
Dozens of Fords, new and old, hatchback and convertible followed Mr Hennefer as he was taken to Howe Bridge Crematorium in Atherton.
His coffin was decorated with pictures of his favourite Fords.
At the crematorium it was standing room only as friends and family filled the hall to celebrate his life.
Organiser Susan Wood led the service which began with Mr Hennefer’s widow Karen giving an emotional reading of the poem The Broken Chain.
Ms Wood told the mourners of Mr Hennefer’s life, his birth on June 26, 1982, his loving family, mum Pam, dad Bob and three older brothers, Jason, Robert and Geoff.
She also spoke of his mischievous time at his schools, Church Road Primary School and Sharples School.
Thanks to his dad Bob, Mr Hennefer was a huge car fan, and after working for Warburtons went on to work at Chorley Street Garage before starting his business Auto Welder Bolton.
After the service concluded Mr Hennefer’s close family released four white doves.

Taken From: The Bolton News