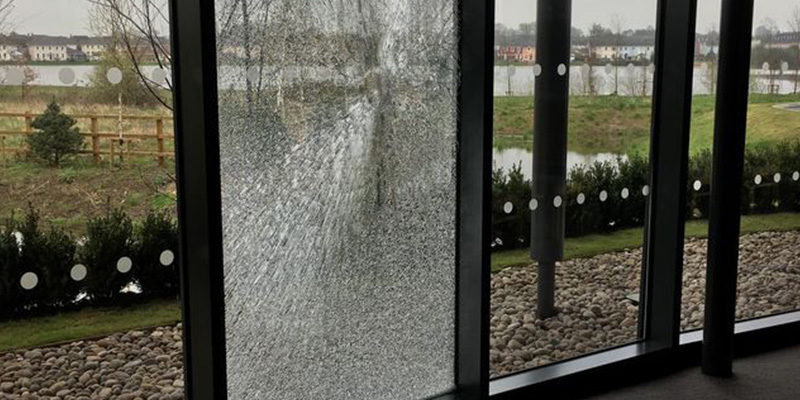 The new crematorium at Watermead in Aylesbury has been vandalised again.

There are just a few days to go until AVDC are due to make a decision on the controversial site.

The building is ready to go, but planning permission was quashed last March.

Overnight the newly-built Watermead crematorium was again vandalised, after letters were sent out informing residents that officers were recommending the scheme be again approved.

Councillors are set on Wednesday to repeat the planning consent order that they originally gave to the project back in 2014.
We've also had reports the allotments were vandalised, too.

What has been done?
After years of legal challenges which culminated in a judge asking for the scheme to be sent back to be re-determined for approval, councillors have been urged to grant permission on Wednesday evening.
Planning officers from Aylesbury Vale District Council have been working with the owner and operator of the facility Westerleigh Group for over a year to bring the application back to committee - updating all reports and re-consulting all consultees.

All statutory consultees are apparently supportive, such as the Highways Agency and the Environment Agency which recognises that the development improves the situation regarding flooding.

While the scheme has been opposed by Watermead Parish Council, an 'independent' poll carried out last year (published by Westerleigh) indicated that there is much more support among the general public in the vicinity of the facility than opposition.

The poll showed that supporters outnumber objectors by more than 5 to 1. 61% of people said that Aylesbury Vale District Council should give permission for the crematorium at Watermead to open; 27% offered no opinion; while just 12% said that permission should be refused and the crematorium demolished.

Richard Evans, Managing Director of the Westerleigh Group, which owns the crematorium, said:
"When the facility is open, people will come to see that we are a force for good for this community.
"We are confident that the crematorium will come to be regarded as a much-loved local facility, providing a haven for the bereaved, as well as offering other community benefits such as car parking.
"As an example, the Watermead Model Boat Club already has our permission to make use of the car park on Sunday mornings, removing the need for them to park on nearby roads."

History
Westerleigh built the crematorium after first being granted planning permission in December 2014.
It identified the site when asked by the council to look for a brown field site, to the north of the town centre and in a location sustainably close to the town.

The land at Watermead was previously the site of an Indian restaurant and dry ski slope.
Mr Evans said he expected councillors to hear from "some very vocal activists" on 18 April, "but they have to take the decision on behalf of the whole community, which wants and needs this facility to open".