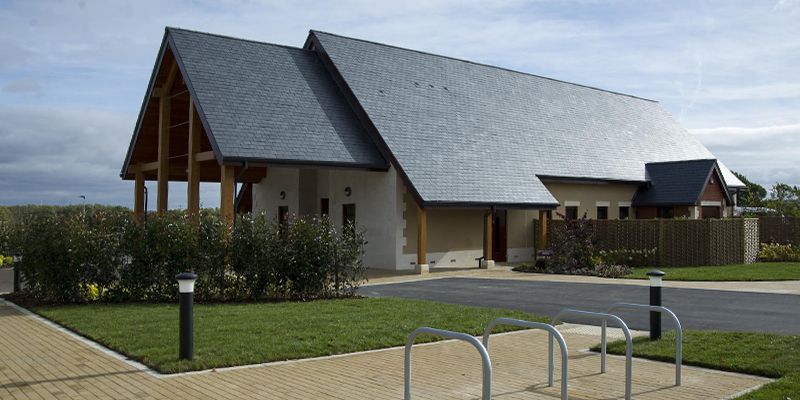 THE first families paid their respects at the new crematorium near Wootton Bassett, which opened its doors yesterday.

Among the first guests to use the facility off the Swindon Road at junction 16, was the family of Peter Uzzell whose house appeared on the front cover of the single Ball and Chain by 80s Swindon chart toppers XTC. Angela Jones of Go Simply Funerals which arranged the service for Mr Uzzell and played the single during the ceremony, said: “When I opened the service I thought it was just really fitting for the new crematorium to play this as the first piece of music.”

The house on Westcott Street was ordered to be knocked down in the 1980s to make way for a new development, but Mr Uzzell refused to move and protested outside his house. “It’s a really lovely crematorium, they’ve really thought about the details, the colours are all lovely and the natural woodland creates a nice environment,” added Angela.

“We’ve worked in 16 crematoria and I would say this is one of the best. It’s all the details that make it special.”
Staff and funeral directors applauded the new building for relieving pressure off the Kingsdown Crematorium, known for its long waiting times. Sue Holden, civil funeral celebrant leading the first services, told the Adver: “Before you always had to allow for extra time in case someone got emotional, or others wanted to say a few words, as people do. “If there was traffic on the A419 or the Cricklade Road you could get really stuck.”

The new crematorium also has one-hour services, adding 15 minutes to services offered at Kingsdown.
“When you’ve got that hour, it makes families feel special, and that’s what we try and do, make things special one last time,” she added.

Gordon Dunn, regional director at the Westerleigh Group, which built the facility, added: “We had eight services on the first day which is more than we anticipated. "Everyone has been really positive, we’ve had overwhelming support.“To have it open and serving the local community is something we’re very delighted about.”

Ricki Johnson, a director from Johnson & Daltrey Funeral Service at Royal Wootton Bassett, said: “I think there’s been a lot of delays over the years with the other crematorium, everywhere has grown, it’s definitely needed. It’s really smart,professional, and modern. It’s a great improvement and I think it will work brilliantly for the local community.”