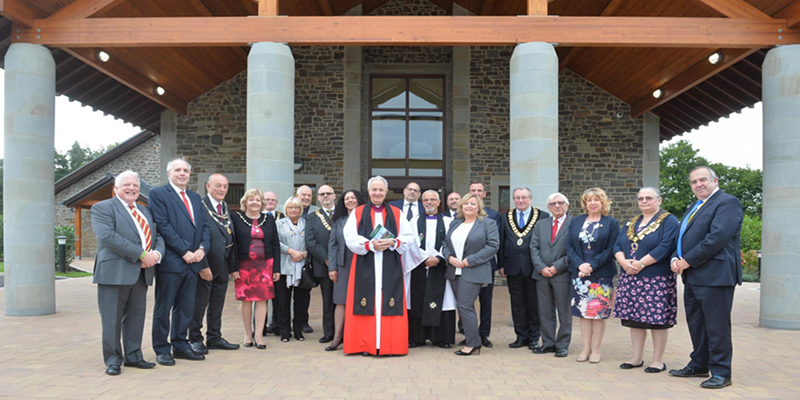 A DEDICATION ceremony led by the former bishop of Monmouth marked the opening of a new crematorium near Newport.

It is hoped that Langstone Vale crematorium, which saw its first service in November last year and will serve Newport and Monmouthshire, will ease the pressure on Gwent crematorium in Croesyceiliog, Cwmbran.

Performing the Act of Dedication was for former bishop of Monmouth, the Right Reverend Dominic Walker.

“It went really well,” he told the South Wales Argus.

“The crematorium hat’s been built here is impressive. It’s got a lot of space which gives it a tranquil feeling.

“They’ve designed it in such a way to make it as beautiful and peaceful as they can.

“Those things are really important to bereaved families who will use this space.”

Rev Walker went on to say that he hoped the crematorium would help the people of Gwent, with families in Monmouth, for example, facing a trip to the Forest of Dean for their nearest crematorium.

“I’m interested to see how this crematorium will be used in the sence of what capacity they will be able to cope with,” he added.

Conservative Langstone councillor, Ray Mogford, who was also at the ceremony, explained that not everyone had been behind the plans to build the crematorium.

“Magor Road has become a bit of a rat run to the M4 in recent years,” he explained.

“But, so far, the traffic to the crematorium has been confirmed to off peak times as far as we can tell.

“Other people have raised concerns about the emissions from the site. But I think it was something the community needed because of the pressures on the Cwmbran site.”

Crematorium manager Heather Hughes said it was a beautiful service which was fitting for the peaceful and tranquil site.

“There was definitely a need for a second crematorium in Gwent,” she added.The only other one was built in the 1960s when cremation rates were 30%. That’s gone up to about 80% now.

“It’s really important for families to be able to say goodbye to their loved ones in an appropriate environment. This is a site for all denominations. We hope to allow their last memories of their loved ones to be as positive as the can be in the circumstances.

Taken From The South Wales Argus