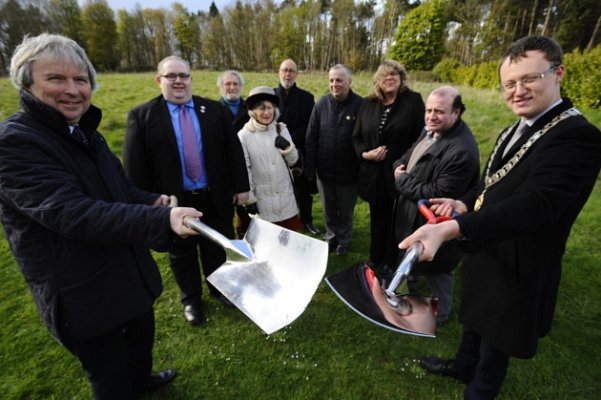 04 May 2016 by Crematorium Editor Westerleigh News

A turf-cutting ceremony was held to prepare the ground on the site next to the town’s cemetery.

More than three years after it was first proposed, construction is finally due to start on a crematorium in the heart of north Norfolk.

A turf-cutting ceremony was held to prepare the ground on the site next to Cromer cemetery.

Costing almost £4m, the facility will spare mourners a 40-mile round trip to the nearest crematorium at Horsham St Faith.

Builders are set to move in at the Holt Road site within the next three weeks, with completion scheduled for December. It is thought the first cremations can take place early next year.

Developer Westerleigh Group is leasing the land from Cromer Town Council, who will receive a significant annual fee from the Bristol-based business.

The ceremony marked the end of a long-running controversy over the crematorium which was unanimously refused planning permission by North Norfolk District Council development committee members two years ago.

That decision was overturned on appeal to the Planning Inspectorate last July which prompted a legal challenge by countryside campaigners. The dispute was settled out of court between Westerleigh and the AONB (Area of Outstanding Natural Beauty) Action Group in January, enabling work to get under way.

Councillor David Pritchard, who has led negotiations on the crematorium, said: “The support within Cromer has been overwhelming and everyone is really looking forward to the crematorium opening.

“I am sure when complete this will be a fantastic facility that will mean the residents of north Norfolk saving a great deal of travel at a difficult time.”

The crematorium will feature a chapel, with seating for approximately 90 people, garden of rest and offices.