Date of first funeral at new crematorium in Cromer revealed 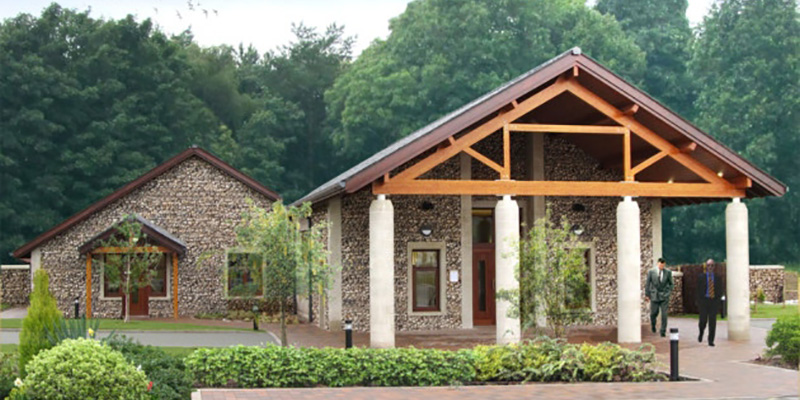 Sheringham-based Blyth & Sons Funeral Services will conduct the service in the 100-seat chapel, just off Holt Road, on Monday, January 16. Local clergy and funeral directors have been given a preview of the new service, which will spare mourners a 40-mile round trip to the nearest crematorium at Horsham St Faith.

Helen Wickes, a funeral director at Blyth & Sons, said: “We are very pleased that the new service is now ready and able to provide, for the first time, a local option for families in the area rather than the journey to Norwich.

“It also promises to provide a much quieter, more dignified setting so that every family get the time and space they need for their individual service.”

The new building, which was developed by the Bristol-based Westerleigh Group, has been fitted with large bay windows overlooking a water garden with wider views of the surrounding woodland beyond and is expected to host around 1000 cremations each year.

The chapel is able to cater for all religions and beliefs and has been fitted with a state-of-the-art digital music system and a traditional organ. Newly-appointed crematorium manager Sam Dellbridge said: “We know how important this new service is to provide something closer and more intimate for local families. We are very fortunate to have such a natural, peaceful setting and we promise to match this with our level of care for the bereaved.”

Construction work started last spring, with the finishing touches being added this week. A turf-cutting ceremony in April marked the end of a long-running controversy over the development which was unanimously refused planning permission by North Norfolk District Council development committee members two years earlier. Further landscaping is still to take place once the worst of the winter is over with plans to lay over 3000 square metres of turf alongside hundreds of bedding plants and trees, as well as long stretches of hedging, to ensure that the new building blends into the surrounding countryside.

Councillor David Pritchard, chairman of Cromer Town Council’s works and general committee, said: “I am absolutely amazed at the attention to detail Westerleigh have shown in the new building using high quality materials sourced from all over the UK. The actual structure, the interior decoration and furnishings are beautiful and bereaved families will know that Westerleigh are both caring and expert in what they offer.

“After all this time, I can’t actually believe that the town of Cromer has a crematorium. It will serve not only our town but the nearby towns and villages. So many people have said to me that at a time of bereavement they want the service to take place locally and without the added problems of travel. With many services already due to take place at the crematorium, the demand is already confirmed.”

Councillor Pritchard, who led the early negotiations on behalf of the town council and has been shown around the crematorium by Westerleigh’s managing director Richard Evans, said: “Myself and the town clerk have met with Westerleigh and their building contractors every month since construction commenced and they have been extremely accommodating, listening and working with us.

“Along with the benefit of the crematorium there will be the added financial benefit to the council, the town and the residents of Cromer. We will be using the money wisely for new projects and as chairman of the committee that looks after the cemetery, at budget time I will be asking for some money to be set aside for improvements in the cemetery. “We look forward to our continued relationship with Westerleigh and we agreed at an early stage of negotiations that out of respect for mourners, there will be no burial or cremation taking place at the same time.”